A Tale Of Two Witches 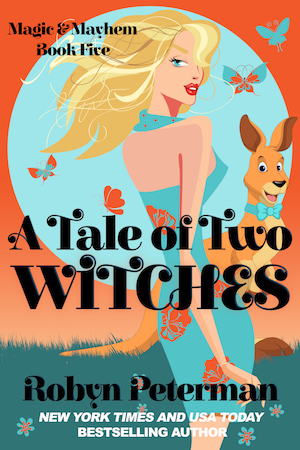 Three waxed cats, one Cookie Witch, a brazilian gone bad and the last name, Bermangoggleshitz… not the best ingredients for a successful spell. Or is it?

Avoiding the truth has been working out just fine for most of my life.

I’m finally happy. I have friends and a kangaroo shifter who adores me. Never in my twenty-nine witchy years did I think I would have a place to call home with people who truly cared.

Now my BFF, Zelda, wants to have a chat. Can’t crappy news wait?

As soon as my varnished Virginia is mobile, I want to go home to my adorable little house I share with with the love of my life and my four semi-violent, adopted, gum-smacking chipmunk shifter sons.

Instead of enjoying a bouncy romp of nookie with my marsupial man whose last name I should really find out, I have to deal with an odiferous, butt-ugly, dead-beat, evil warlock of a dad named Bermangoggleshitz—the very same douchecanoe that tried to kill my rodent children.

Not to mention, said sperm donor has called up a Legion of demons from the Underworld. Fanfreakintastic.

So armed with my questionable intellect, a shaky handle on the French language and a penchant for blowing up buildings, I’m gonna grab this problem by the nuts and squeeze—like a brazilian times…whoops, bazillion. That French gets me every time.

I will have my happily ever after no matter what or my name’s not Sassy Louise…umm… Bermangoggleshitz.

“My Virginia has a heart beat,” I whispered, keeping my stance very wide. “I think I made a huge mistake.”

Standing in the bright airy kitchen of my BFF’s house, I decided to come clean. Zelda was a healer witch and I was definitely in the market for some magical restoration.

“I’m going to ask a question I really don’t want the answer to,” Zelda said, pulling on her wild curly red hair and staring at me like I’d grown two heads.

I got that look a lot—from everyone. Whatever. I was fairly certain I was clear. I wasn’t sure how much clearer I could get than telling her my girly parts had a pulse.

“Go ahead,” I told her, holding my position. It was the only one that was working at the moment.

“Why does your nether region have a heartbeat?”

“If you’re going to speak French, I’m going to zap a massive hairy wart onto your chin. I’m having a crisis here,” I squeaked. “I’m talking about my va-jay-jay, not the weather season, for the love of the Goddess.”

I was pretty sure she was trying not to laugh. This was not a laughing matter. At all.

“I went to the Hooch sisters,” I confessed, going ghostly pale at the recent memory.

“You did not,” Zelda groaned with a wince.

“I did,” I admitted, hanging my head in mortification.

It was not my best move, but I did it and I had to own it. My weather seasons were not going to let me forget it anytime soon.

“What were you thinking?” Zelda gasped and grabbed the table so her knees didn’t give out.

“I don’t know,” I said, beginning to pace and then thought better of it. Movement was not my friend in this predicament. “I thought it would be sexy—that Jeeves would think it was hot. Goddess, I don’t know what I was thinking. I guess I wasn’t thinking at all.”

“I suppose I wanted to surprise Jeeves. He’s a total lights on kind of kangaroo. I thought an unvarnished Virginia would be a turn on.”

“Did you just say unvarnished?”

“Okay, never ever put the visual of you and Jeeves in any kind of compromising position in my head again. Furthermore, never refer to your bits being unvarnished in my presence in this lifetime. If you do, I’ll turn your blonde hair green. You’re a witch. Why would you go to the Hooch sisters when you could have done a little voodoo on your hoohoo and gotten the same result without having to walk like you’ve been riding a horse for a month straight.”

Dang, she had me there.

“Well, I heard Wanda and DeeDee talking about it and I just…” I trailed off.

I had done a tremendous about of stupid things in my twenty-nine and three quarters years on the earth, but this may have taken the cake. Ever since spending nine months in the pokey for misuse of magic—or rather a penchant for blowing up buildings and stealing other witches boyfriends, I’d gotten a little bored and craved excitement. However, getting a Brazilian from the masochistic Hooch sisters was too much excitement even for me.

“Let me get this straight,” Zelda said, taking a seat at the table and staring up at the ceiling. “You got your lady bits waxed and now said bits have a heartbeat?”

“Yessss. And it hurt like a mother humper. Those sisters are violent. They threw me all over the table and then they…”

“Stop,” Zelda shouted, slapping her hands over her ears. “I do not want to have to go back to therapy because your Virginia got a hair cut. Trust me, I can imagine—no need to narrate.”

“Right,” Zelda replied letting her head fall to her hands. “And you’re telling me this because you hate me?”

“No, I love you. You’re my best friend. I’m telling you this because I need to be healed.”

Zelda’s head snapped up and she pinned me with a stare that made me think this was my second bad idea of the morning.

“You do realize that whatever body part I heal, I take on that pain,” she said with her brows raised almost to her hairline.

“For you,” she shot back. “I’m not taking on a throbbing Virginia because you’re an idiot.”

“I see where you’re going with this,” I told her. “Do you have any frozen peas?”

“Yes. Very. If you’re not going to heal me, the least you can do is let me ice my Virginia with your vegetables,” I said, thinking it was a reasonable request. “I mean, I can barely walk. It was hell flying over here on my broom.”

“Dude, why in the Goddess’s name are you riding a broom if your Virginia is on fire? We don’t even need brooms to fly, dorko.”

Without waiting for an answer, Zelda stomped over to the freezer and ransacked it. Muttering something rude about fire crotches, she tossed me a bag of frozen mixed veggies. Easing myself to the floor while keeping my legs as far apart as humanly possible, I gratefully put the bag on my weather seasons. I was going to learn French soon. Zelda spoke it entirely too much for me to not at least try to learn a few words.

“I’ll return this when I’m done,” I promised.

“Great. Thanks. Listen, do not ever go to those women. Ever,” I told her. “They’re heinous. I’m pretty sure I created an entire new dictionary of swear words during my session.”

“Sassy, I have no intention of going to the Hooch sisters. They’re buzzard shifters and they have beady eyes, but thanks for the heads up,” Zelda said biting back her laughter.

“That’s what best friends are for,” I told her, giggling. “We have to look out for each others Virginias.”

“Can’t say I’ve heard those requirements for a BFF, but you’re my first best friend,” Zelda said with a huge grin as she plopped down on the floor next to me. “You really are an idiot.”

“Tell me something I don’t know,” I shot back with an eye roll and a laugh.

“I do have something to tell you that you don’t know,” she said, looking serious. “But I think it can wait until you only have one heartbeat.”

“Will it be painful?”

“Shit. Even I know that’s not a good response,” I mumbled. At least the peas and carrots were tamping down the inferno in my pants. Did I want to add more yuck to my plate this morning?

No. No I didn’t. Avoiding the truth had worked out just fine for most of my life. I was finally happy. I had friends and a kangaroo shifter who adored me. Never in my witchy life did I think I would have a place to call home with people who truly cared. Crappy news could wait.

As soon as my crotch was mobile, I wanted to go home.

“Nope, the gorgeous little turds have their days and nights mixed up. Mac and I were up all night with them,” she said in a dreamy happy voice.

And we had adopted four full-grown chipmunk shifters—Chip, Chad, Chunk and Chutney. My boys were as dumb as a box of hair, but I loved them and they loved me back.

“You’re so lucky, Zelda,” I whispered as she nodded off on the floor next to me.

I laid my head on her stomach and got comfortable. She smelled great and she loved me—well she liked me a lot. She liked me more when I didn’t borrow her stuff. I was trying to give up my sticky fingered ways, but she had really good stuff.

“We’re both lucky,” she said groggily right before she conked out.

She was right. We’d been cellmates in a horrible prison for wayward witches and now we were BFF’s with bright futures ahead of us in the beautifully run down Assjacket, West Virginia. I was never going to take my new luck for granted. Ever.

As soon as my Virginia stopped vibrating, or when Zelda woke up, I was going to get my magical hinny back to my little family and continue my new happy life.

No more life threatening or va-jay-jay ripping excitement for me.

I was a witch reformed—for the most part.