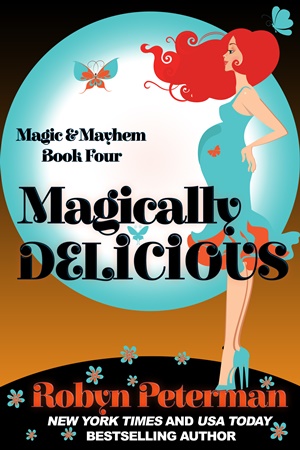 What does a hungry, pregnant witch do when her whole freaking town goes on a no carb diet?

I’ll tell you what. She goes on the sly and conjures up some anchovy-chocolate chunk cookies dipped in hot sauce—that’s what.

Of course my cheating gets complicated when all of the magic in the world goes on the fritz. To solve that particular wrinkle, I’ll have to finally find the source of the lurking evil.

Easier said than done. Maybe if I wasn’t pregnant and starving, I could deal with the nasty old witch who resides in a gingerbread house. Add in carb eating fairies who speak French and three rotund familiars who enjoy defacing property with profane graffiti, and what you get is almost more trouble than I can handle in my baby baking condition.

I’m still not convinced I won’t be giving birth to puppies since the smokin’ hot father of my babies is a werewolf, and NO ONE has given me ANY concrete proof to the contrary. Getting knocked up by the werewolf of my dreams was all kinds of awesome in practice, but the reality of becoming a mother scares me more than Baba Yaga’s horrendous 1980’s wardrobe.

Monstrous decisions with enormous ramifications are best handled with meticulous planning—or in my case—after eating a giant mustard slathered jelly doughnut. Neither of those options is possible at the moment, but since there is no way I’m bringing my children into a magicless world, winging it will just have to work.

Wait… Was that a contraction I just felt?

Goddess help us all…

“I’m so sad we’re out of pickles.” I sighed as I turned the empty jar over. They’d been delicious dipped in dark melted chocolate. I’d even downed the salty juice, much to the gagging dismay of my dad.

“Zelda, while I understand the diet of a pregnant woman is rather, um… unconventional, don’t you think chocolate dipped pickles and mustard slathered jelly doughnuts might be bad for the babies?” Fabio suggested as politely as he could considering he was seconds away from heaving.

“Pretty sure they liked it,” I said, sticking my finger in the jar and swiping around for droplets of pickle juice. “Now I think the pizza with pepperoni and Snickers was all kinds of wrong. That one didn’t quite agree with me.”

“Thank the Goddess,” he muttered with a wince.

“So next time I’m going to substitute malted milk balls for the Snickers.”

“Wonderful,” Fabio choked out, paling considerably. “Maybe we should consult a doctor about this.”

“Don’t have to,” I told him with an arched brow and a wide smile. “I’m the Shifter Wanker around here. What I say about health and wellness goes, and DeeDee my doula says I’m doing great. I say we whip up some deep fried bananas with hot sauce.”

Fabio was silent as he digested my newest culinary request. He’d been an outstanding enabler in my mission to keep my growing belly full—until now. Poor Wanda—the best baker in town—had lobbed a pot at my head when I’d requested she bake some jalapeno and anchovy chocolate chunk cookies with turkey gravy to dip them in. However, it was the sushi flavored ice cream that made her throw up her hands and ignore me. That was a week ago. My raccoon Shifter buddy was such a softy, I expected her to come back around any day now.

“Look dad, I know it’s a little gross, but if I don’t eat, I get cranky. When I get cranky, I start fires and blow stuff up. I do believe sautéed M&M’s with blue cheese on crackers is a small price to pay to keep Assjacket, West Virginia on the map.”

“A little gross is an understatement, Zelda,” Fabio argued as he wiggled his fingers and magically removed the empty jar from my hands, replacing it with an apple—a plain apple—with no chocolate or cheese whiz to dip it in.

“Um… what am I supposed to do with this?” I asked as I cocked back and prepared to bean him in the head with the boring piece of fruit.

“It’s an apple. Eat it,” he snapped, running his hands through his thick mane of red hair that matched my own. “I’m terrified of what you’ll give birth to if you keep consuming crap.”

“I’ll be having puppies,” I shot back. “No one yet has given me solid evidence that this is untrue. Puppies will eat anything—including crap—literal definition intended. So quit your bitchin’.”

I took a tentative bite out of the apple to make him happy. It tasted amazing even without maple syrup or salsa—not that I would share that nugget. I still wanted something fried and dipped in whipped cream, but maybe the old warlock had a point. What if my kids—or puppies—came out demanding TV dinners, McDonalds and sugared soda?

I hated it when Fabio made a good argument.

“How about this?” I bargained as I polished off the apple and went for another. “I eat three healthy meals a day and my snacks can be chocolaty, fried, salty and wrong.”

“How many snacks are we talking?” he asked warily.

“Six,” I countered. “One before and after each meal.”

“Fine,” he muttered somewhat mollified by the thought of me swallowing anything that wasn’t dipped in lard and deep-fried. “You have a witch’s metabolism, so the weight gain isn’t an issue. I just worry about your health.”

“Fabdudio,” I said, harkening back to the days before I called him dad. “I’m truly moved by your concern, but I’m freakin’ hungry, and my mouth wants yicky stuff. Not sure what you want me to do here.”

Expelling an enormous amount of air through my pursed lips I created a noise that sounded alarmingly like a fart. I tossed three bags of Oreos, four containers of ice cream, twelve bags of chips and my hidden stash of Goobers and Raisinets into the garbage. It was painful, but my dad beamed so wide, I almost felt proud—almost. Getting rid of my stash was a large price to pay since I’d had big plans to eat a gallon of ice cream covered in barbeque chips for dessert, but Fabio was right. I was eating for three, and I needed to feed my puppies some non-fried, non-pre-packaged stuff that grew out of the earth.

I suffered only a smidge of guilt as I knowingly bypassed the cabinet loaded with Twinkies, Munchos and Ho Hos, but the secret stash was for emergencies. A pregnant girl had to do what a pregnant girl had to do. The safety of those around me was important. I was a loose cannon on a good day. Starving and loaded with strange puppy hormones, I was a magical disaster waiting to happen.

“Happy now?” I asked with brows arched high and my arms crossed over my chest.

“Good. If I can’t eat, we have to go do something. I can’t sit here in the house and not consume everything in sight.”

“How about a little shopping?” Fabio suggested with a gleam in his green eyes.

My disappointment at not being able to eat my own weight in sugar vanished with warp speed. Shopping was my third favorite hobby after eating. My first was the horizontal mambo with the sexiest werewolf alive… my newly acquired mate, Mac.

“I do believe I could carve out a bit of time for that,” I squealed. I tore around my new enormous kitchen in Mac’s house searching for my Birkin bag and my shoes.

The overpriced purse had been a gift from my dad. Fabio was making up for the many years of my life he’d missed by not knowing of my existence. It was excessive, but I was on board. I’d recently turned over a new leaf that precluded me from conjuring up expensive designer duds and accessories—which sucked.

Of course, nine months in the magical Pokey for accidentally mowing my dad down with my car had given me a lot of time to think. Well, not really. What it had given me were parole conditions stipulating I could only use my magic for the good of others—a rule I secretly liked. However, I had a reputation to uphold. Being a slightly unbalanced healer witch who didn’t give a shit about anything was a full time job. I used to be good at the not giving a shit part, but the furry freaks of Assjacket, West Virginia had weaseled their way into my heart when I wasn’t looking. My dad was also a determining factor, but mostly it was Mac. I still had an outstanding handle on the unstable and healing parts, but the rest was more of an act than reality now.

“Where are we going?” I asked, shoving my feet into my fabu Jimmy Choo wedges—another gift from dad—and slinging my bag over my shoulder.

Sweet Goddess on a bender, this was difficult. I loved shopping in Milan. Adored Paris, but the salty soft pretzels with the neon orange, melted cheese dip were right at the stupid entrance of Target. Was this a test? Was Fabio screwing with me? Could I get grounded for this?

Wait a second. I was a thirty year old, knocked-up, mated witch with more power in my pinky than most of my kind. No one was grounding my ass—not even my well-meaning father.

My head said Paris. Crème brulee with a couple berries on the top was a far better choice than a processed pretzel with a cheese product that had very little to no dairy in it.

Decisions were hard—not to mention speaking—especially when I was drooling.

“Um… Target has a line of maternity clothes,” I suggested weakly, willing myself to block the gooey delicious cheese from my brain. Excess mouth water was not attractive—at all. Plus, it was a dead giveaway to my real motive.

“Darling, you’re not even showing yet,” Fabio said. He lovingly patted my still flat tummy and kissed me on the head. “I was thinking we could blow a wad at Gucci and then pop into Jimmy Choo.”

My groan was pathetic to my own ears. Fabdudio was pure evil. I felt pulled in three thousand and forty-one directions. Shoes or orange-yellow warm-ish goo?

“I think we should stay in the country and go to Target,” I mumbled, brushing some not so imaginary cookie crumbs off of my Alice and Olivia mini dress. “If there were any complications with the pregnancy, it would be better to be closer to home and… ”

“You want a pretzel,” Fabio accused. He closed his eyes, sighed very audibly and tried not to laugh.

“Yes, by the love of all that’s magical,” I shouted and stomped my foot. “I want a pretzel.”

“Would you be willing to skip the cheese?” he negotiated.

“Not sure I can,” I answered honestly with a helpless shrug.

“I feel you,” he agreed. “They’re quite tasty even though I can’t identify what the hell is in the cheese. How about you limit yourself to one?”

“Two and you have yourself a deal,” he shot back.

“Done!” I yelled and grabbed his hand before he could change his mind. The nearest Target was three hundred miles away. It was a pleasant day to ride our brooms, but it was broad daylight. Getting shot at while flying over West Virginia for being mistaken for a UFO was not my idea of a good time. Poofing—or transporting for a more accurate and mature term—would be safer and faster.

Target, an afternoon with my dad and the soft chewy goodness of two pretzels dipped in gelatinous unidentifiable chemicals.