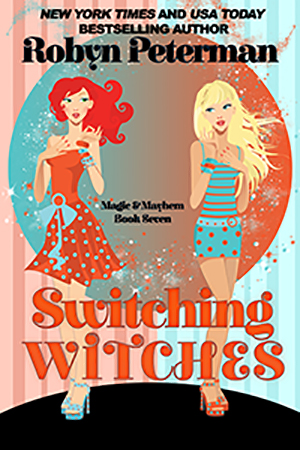 How in the Goddess’s name did I get stuck at the Witchypoo Convention at Rump Arena in Hexington, Kentucky? Whoops… my bad. Rupp Arena in Lexington, Kentucky. Whatever. It’s like one cavernous indoor garage sale of “magic” crap. It’s nothing more than a convention of human wanna-be witches in pointy ankle boots and half-price black hats.

And where in the Goddess’s gauchos did these humans get their info on witch-wear? Real witches wear Prada… and Stella McCartney and Alice and Olivia and … well, you get my point.

Baba Yopaininmybutt sent me to root out the very evil shenanigans going down in the sea of faux witches, mummies and vamps. On the plus side, I’m looking forward to hotel sex with my hotter that heck werewolf mate. However, nookie time is nada. Believe it or not, a gay fainting goat shifter, a magical mystery woman and a dude who looks alarmingly like me have shown up to complicate matters.

A mystery witch is dealing in blood. I might have a twin. Where do gay fainting goat shifters come from anyway? And I will be seriously put out if I can’t have hotel sex.

“Are you a good witch or a bad witch?” the gothic looking human disaster screeched as she body-blocked the entryway to the shitshow awaiting us. “Answer me now or prepare to be smote to the bowels of Hell where you will burn until crispy in the cauldron of eternal flame.”

“Nope, but I’m pretty sure there’s a cauldron of eternal bullshit right here,” I muttered.

“Answer or be smote,” the human snapped.

“Wait. Is she talking to us?” Sassy asked, trying not to laugh.

“I’d have to go with a yes on that one,” I replied flatly. “The customer service here sucks.”

It took everything I had not to knock the pointy black hat off of the gatekeeper’shead. The stereotypes of witch-wear were positively cringey.

The human bared her teeth and hummed something that sounded distinctly like an out of tune version of Ding Dong the Witch is Dead. Her chompers looked strangely white in contrast to the jet black lipstick she sported.

What in the Goddess’s name was happening? Was this seriously how humans thought witches dressed?

Glancing at the people wandering around, I sighed at the tragedy unfolding before my eyes. I’d never seen so many black robes and pointy ankle boots in my freakin’ life. Mechanical flying bats zoomed overhead and sparkling black spiders hung in gauzy webs covering the windows along the long entry hallway. There were even a few live monkeys on leashes sporting spandex wings. It was like Halloween on crack.

“Good witch or bad witch?” the dummy growled. “You must declare your status to enter the sacred realm of Magical Mystery and Mayhem.”

“Are those my only two options?” I inquired, clasping my hands together so I didn’t zap her bald. It really wouldn’t do to blow my cover in the first five minutes.

The human seemed confused. Clearly, I had strayed from the script. I was good like that.

She narrowed her bizarre blood red eyes, causing her left contact lens to pop out. It was now positioned on her cheek and looked like an inflamed boil. I considered snapping a picture with my phone but thought better of it. She was blocking the entrance and pissing her off more probably wasn’t in my best interest. Normally I would wave my hand and zap her out of the building, but I wasn’t allowed to reveal my magic to humans. This was sucking some serious ass so far.

Totally unaware of her newly acquired plastic facial wound, the wannabe witch rudely cleared her throat and pointed her wand at me. “Don’t make me put a curse on you,” she hissed, waving the useless glittery stick in a figure eight motion. “Are you a good witch or a bad witch?”

Glancing over at Sassy—my BBF by default—I shrugged and rolled my eyes.

“What did you expect?” Sassy asked, trying to peek past the weird human guard dog. “The place is called Rump Arena.”

“Dude, it’s Rupp Arena—not Rump Arena.” My second eye roll encompassed both Sassy and the idiot at the door. I didn’t have time for this crap. It was ludicrous enough that we were even here.

“Duuuuude,” I said with a laugh as I slapped Sassy a high five. “That was impressive.”

“Right?” Sassy shot back with a shrill giggle. “I was speaking German with a little Chinese thrown in.”

“I get that all the time,” Sassy told her in all seriousness. “I speak in tongues. Most of the time I don’t even realize I’m speaking another language. It’s completely unbelievable!”

The human quickly grabbed her clipboard and moved behind the table loaded down with badges shaped like little black cats. “Okaaay… right. Names?”

“Zelda’s last name is Houston or Dallas,” Sassy told the woman and then winked and grinned at me. “Do you have a name?”

The human nodded and kept shuffling through her papers. I assumed she was looking for our names which I was positive were nowhere on her list. Our fearless and clearly unorganized leader, Baba Yaga, hadn’t mentioned we needed to register for the Witchypoo Convention. When we got back home to Assjacket, West Virginia, I was going to kick our idiotic boss’s ass for sending us to this debacle.

“I’m Verruca Trotcackler,” she replied, still pouring over her list.

Verruca’s eyes narrowed and she yanked a small glass vial from the pocket of her shapeless black robe. “Yessssss,” she snapped, wielding her bottle and grabbing her wand. “I have eye of newt in this bottle and I’m not afraid to use it. If you value your life, you will not tangle with Verruca Trotcackler. I am the most powerful spellcaster in Kentucky—or at least in Lexington—or Hexington, as I like to call it. And by the way, Zelda Houstonordallasis a stupid witch name.”

“Take. That. Back,” I said so calmly that Sassy dove underneath the badge table in terror. Of course, my last name was not Houstonordallas, but that was irrelevant. No one was going to smack talk me like that—especially not a human dressed in a shitty witch costume.

Verruca’s one red eye and one brown eye grew wide with fear. I was ninety-nine point nine percent sure that my hair had begun to blow around my head and that a few enchanted sparkles might have leaked from my fingertips.

Thankfully, everyone here was so nutty that mynormaldidn’t stand out.

For the love of the Goddess, there was a practically naked human man painted silver posed in a frozen position not even ten feet away. Not to mention, there was a magician sawing a gal in half down the hallway.

Sassy and I fit in perfectly. We just needed to keep a lid on the big stuff. Zapping a wart or two onto Verruca’s nose should be fine.

“Sorry,” Verruca mumbled. “I can’t seem to find your names on the list.”

“They’re right there,” I said pointing to the list and wiggling my finger.

Sure enough Sassy Louise Bermangoggleshitz Pantsand Zelda Houstonordallasappeared at the top. Verruca gasped and stared at me like I had three heads. I didn’t. I had one head of fabulous wild red hair.

And… I was a realfreakin’ witch.

“Strange,” Verruca said, gaping at our names. “I could have sworn… I mean… umm…”

“Your contacts must have blurred your vision,” I told her politely. I could be nice—kind of. There was no reason to send Verruca to therapy… yet. “Oh look! There are our badges.”

I snapped my fingers and conjured up kitty badges for Sassy and me. And while I was at it, I conjured up one for my mate Mac and one for Sassy’s mate Jeeves.

“Weird,” Verruca said, as she warily handed them over to me. “Did you bring your familiars?”

Yanking Sassy out from under the table, I slapped her badge on her chest. “You mean my Crotch Goblins?”

“My Crotch Goblins. And yes, I brought them. There are three—Fat Bastard, Jango Fett and Boba Fett. They’re cats with ball cleaning issues. I’m quite sure they’re down the hall taking bets on if the woman getting sawed in half will live. Oh, and don’t be alarmed if they talk. They’ve had electronic voice boxes inserted. The program has been set to profane. Just ignore them.”

“Is that humane?” Verruca asked, paling at the new information.

“No, but it’s funny,” I told her as I moved to go past her. I had to congratulate myself on that one. There was no way in the Goddess’s green earth that my cats could pretend to be real cats. Talking cats would be a dead giveaway. “And don’t threaten them with eye of newt. They’ll eat it.”

“Okay,” Verruca said, shoving the bottle back into her pocket. “The vendors are all open and take credit cards, but most prefer cash. Your badge will get you into all the parties and lectures. However, if you want your palm read by Marie Laveau, you have to pay… in blood.”

“You’re joking.” I halted my forward motion and glared at Verruca.

If true, this was a disturbing wrinkle and possibly the reason we were here. Baba Yocrypticpaininmyass wasn’t too forthcoming about this mysterious mission. But blood? Bartering for blood was forbidden, as was stealing hair. For a witch—a realwitch—taking human or magical blood was a big fat no-no. Even just a drop was illegal. Interesting.

However, someone sporting the name Marie Laveau was definitely nota real witch. The realVoodoo Queen by that name was as dead as a doornail.

“Not joking,” Verruca said, holding up her Band-Aided middle finger. “She doesn’t take much.”

Sassy gasped and began to sparkle. Not good. I wasn’t sure if it was because Verruca had flipped us off or it was the blood thing. It didn’t matter. Sassy was capable of blowing up Rump Arena… shit, Rupp Arena. That certainly wouldn’t go over too well.

Clapping my hands and stunting Sassy’s magic, I smiled at Verruca. “Does the health department know about this bloodletting?”

Verruca did not smile back. “It’s all in fun,” she protested, growing uncomfortable under my gaze.

“Real witches don’t deal in blood, Verruca,” I snapped. “Ever.”

Her eyes narrowed and she pursed her black lips unattractively. “How would youknow? Someone dressed in Prada is not a realwitch. I know a real witch when I see one.”

Sassy grunted and raised her hands high in the air. Verruca was about to lose a body part—or gain one. I could never tell with Sassy. Shooting Sassy a look that made her reconsider barricading herself back under the table, she reluctantly let her hands fall to her sides.

Breathing in through my nose and slowly out through my mouth, I got up in Verruca’s face. She was treading on some very thin ice. I took my fashion veryseriously. “It’s Stella McCartney. Not Prada. I only wear Prada on Tuesdays, Valencia Snotcracker.”

“Ohhhh, good one,” Sassy congratulated me.

“Thank you,” I replied. “And Veronica, you should seriously get your eyes checked.”

“Because you clearly can’t tell the difference between a real witch and a fake one.”

On that note, we entered the sacred realm of Magical Mystery and Mayhem. It was a shit show of epic proportions. There were enough counterfeit witches, vampires and mummies walking around to give me nightmares for the next century or two—but there was also real magic somewhere in the mass of ridiculousness.

Maybe there was a reason to check this out. Or maybe Baba Yaga was right out of her debatably sane mind.

But then again, what the Hell did I expect? She did send us to the Witchypoo Conventionat RumpArena in Hexington, Kentucky… 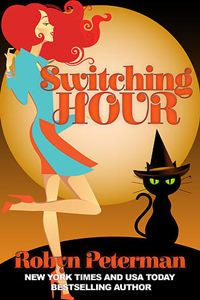 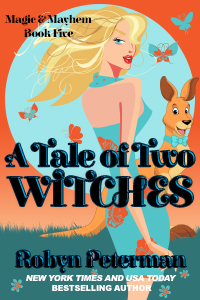 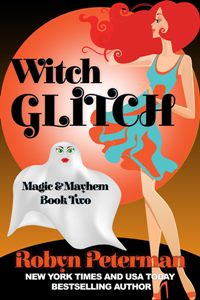 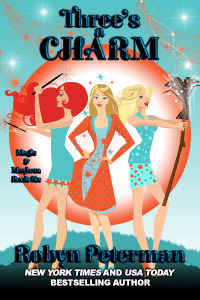 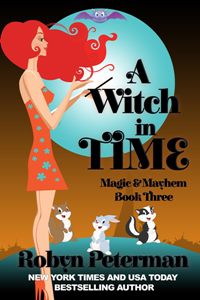 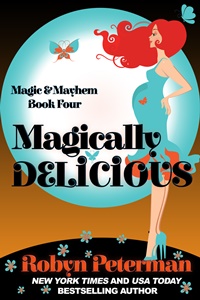