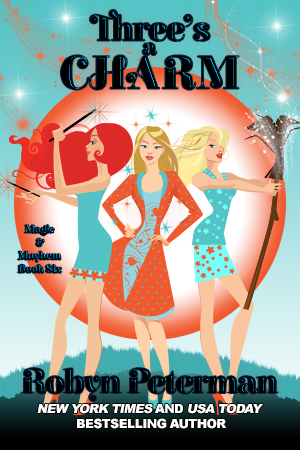 What’s a witch to do when her magic is on the fritz and there’s a huge pile of laundry to be done? Easy. Flood the entire house. Everyone wants a bubbly indoor freakin’ swimming pool… right?

Just when everything is right in my life, something has to go wrong—times three. Number one: an unknown evil force wants to steal my power. Now, instead of protecting and healing the whacked out inhabitants of Assjacket, my power has wonked out on me and I’ve blasted ginormous holes all over town. Not to mention Roger the Rabbit is now sporting a pentagon of penii thanks to me and is keen on contacting the Guinness Book of World Records.

Armed with questionable voodoo skills and seriously frayed nerves, I’m Two: gonna do what any partially-sane, potty-mouthed, witch would do… I’m calling in the semi-evil, butt-ugly Bermangoggleshitz to train me. The warlock’s penchant for push-ups makes me hate him with the fire of a thousand suns, but if I can’t control my dark magic, it will control me.

With Sassy and Cookie Witch by my side, I’ll Three: get a handle on my dark voodoo—or doodoo as I’ve renamed it—so Assjacket won’t end up as one massive crater. And I need all the help I can get. An evil like we’ve never seen is gunning for us—specifically me.

We’ll be the Three Amigos. The Three Musketeers. The Three Stooges. Whatever. As the saying goes…three’s a crowd, three’s company, three’s a party.

Nope. Three’s a charm. And I’m gonna turn it on for all I’m worth.

“Would you rather eat a vat of salad dressing or six rolls of toilet paper?” Sassy asked as she dusted off her broom in anticipation of our afternoon excursion.

“Can I soak the toilet paper in water first?”

Sassy tilted her head and considered the request. “Yes, that would be okay I suppose.”

“What kind of salad dressing?” I inquired as I shoved my profane and socially unacceptable familiar off the sofa.

The obese furry butthole had been sharpening his claws on my leather couch. My choices were to declaw him, de-hair him or shove his enormous kitty butt off of it. I went for the kindest of the three. He landed with a thud and a string of swear words that made me grin.

“Umm, okay… but when you say salad dressing, I think of French or Italian.”

Sassy’s massive eye roll alerted me that something appalling was about to leave her mouth. She rarely disappointed.

“Listen, little missy, we’re playing ‘Would You Rather’. I asked you if you would rather eat a vat of salad dressing or six rolls of toilet paper. I did not ask you if you wanted to eat a country. Countries are entirely too big to eat. Period.”

“I said French or Italian,” I repeated.

“I heard you,” she shot back, waving the bushy end of her broom at me. “French and Italian are full of people and cars and shopping malls. It would be impossible to eat them. The game has to be real. You feel me?”

“Youse want me to gag her or blast her ass out da front door, Doll Face?” Fat Bastard asked, leg perched high over his head without even looking up from his morning nad cleanse.

I actually considered it for a brief moment and then sadly shook my head. While Sassy had come a long way, she was still sorely lacking in the brains department.

“Youse is losing your touch, Zelda,” Fat Bastard pointed out as he took a quick break from his rank habit. “If youse ain’t gonna zap her, youse gotta call her something rude.”

“Lumpy Bulge Spasm gots a nice ring to it,” Fat Bastard announced and then went back to his slurpy routine.

“That’s almost as disgusting as you are,” I told him, trying not to laugh.

“Stop,” I shouted. “I’m gonna have to go back to my idiot therapist, Roger the rabbit, to get my brain wiped if you keep that shit up.”

“One more?” Fat Bastard pleaded with an evil little smirk on his kitty face.

“Steamy Ass Demon,” he grunted and then hauled ass out of the room at warp speed—amazing for an animal as rotund as he was.

“Your cat is a Dumbass Dong Gremlin,” Sassy said, grinning from ear to ear.

“I’d have to go for Ball Licking Foul-Mouthed Douche Canoe,” I replied.

Sassy’s laugh bounced through the room and I giggled. She drove me all kinds of crazy, but she was loyal to a fault even if she did pilfer my belongings every now and then.

Our introduction to each other had been under auspicious circumstances. We’d both been doing time in the magical big house for misuse of our power among other infractions. I swore to the Goddess that once I got sprung from the pokey I would avoid her like the plague. However, the grand plan of life didn’t exactly work out that way.

Nope, here I was in Assjacket, West Virginia happier than I’d ever been in my entire life—a fact that gave me nightmares occasionally. I had Mac, my mate—the most gorgeous werewolf on the planet and we had two perfectly beautiful twin babies, Audrey and Henry. I was terrified I’d blow out puppies due to the fact that I was in a cross-species relationship, but thank the Goddess I didn’t. All of the violent threats I’d made to Mac’s man bits were for naught—which is a good thing. I loved his man bits.

My job as the Shifter Whisperer or Shifter Wanker as I preferred, kept me busy because Shifters were extremely fucking accident-prone. I complained constantly so my reputation as an uncaring, materialistic witch stayed secure, but sadly it was being systematically shredded. Everyone thought I was nice and good and kind. It was freakin’ horrible.

Glancing down at her phone, Sassy gasped and then laughed. “Zelda, we have a problem.”

“Don’t you mean, Houston?” I shot back with a grin.

She stared at me blankly and then narrowed her eyes.

“When did you change your name to Houston and why didn’t I know about it?” Sassy demanded.

“I just learned French,” Sassy hissed. “I do not know Chinese. If you don’t speak English, I’m gonna have to wax you.”

With a flick of my fingers, I duct taped her mouth shut. The old me would have given her a massive wart in the middle of her face and turned her hair green. Goddess in gaucho pants, I was losing my touch. Fat Bastard was correct and it made me itchy.

Deciding to make her bowlegged if she rode my nerves even an inch farther, I removed the tape—with my hands. It was far more dramatic.

“Mother humper on a unicycle,” Sassy grunted. “I was joking. I wouldn’t wax you. If I did, I’d live in fear the rest of my life waiting for your retribution.”

“You just spoke Chinese,” I pointed out.

“I did?” she asked, confused but clearly impressed with herself.

She handed me her phone and I scanned the text quickly. What the ever-loving hell?

“Don’t you have to?” she asked, wincing as she reread the text over my shoulder.

“I fix wounds. I don’t heal stupidity. I’m not a miracle worker. I’m a witch,” I snapped. “Plus I have to take on the pain of the dumbasses when I heal them. I have no intention of taking that on.”

“Right,” Sassy said, with a nod of understanding. “That’s why you gave me a frozen bag of veggies after the tragedy of my Brazilian.”

Rolling my head to relieve tension and the desire to blow both Sassy and Assjacket off the face of the planet, I nodded. I didn’t trust anything nice to leave my lips, so I opted for silent communication. My maturity appalled me.

“Do you think it will heal on its own?” she asked, trying not to laugh.

“No,” I shouted. “I did not sign up for this. I was blackmailed into it by Baba Yobuttinski, our fashion disaster of a boss.”

“Not to mention your dad’s girlfriend,” Sassy reminded me as if I needed a reminder.

“Do you hate me?” I asked with fingers twitching to give her a permanent Mohawk. However, the fact that my dad was dating the worst dressed and bossiest witch in existence wasn’t Sassy’s fault. At all.

“Just checking,” I replied. “Because only mortal enemies who want to be bald would mention the gag-inducing fact that my Fabdudio is shagging Baba Yostuckintheeighties.”

“My bad,” Sassy said quickly while checking to make sure she still had hair. “Won’t mention it again.”

We both sat in silence after my outburst and stared at the offending text.

“He seems pretty desperate,” Sassy pointed out. “He even offered to send a picture.”

My gag reflex kicked in and I wiggled my fingers, blowing Sassy’s phone into oblivion. Goddess that felt good. “Well, now he can’t. Problem solved.”

“That was my phone,” Sassy said.

“Yep,” I said as my hair began to blow wildly around my head and my body began to glow. “Your point?”

“Umm, no point,” she said, backing away and getting under my coffee table.

“Grab your broom,” I instructed as I conjured up a broom for myself.

We didn’t need brooms to fly, but Sassy loved riding hers so I thought I’d give it a try. I knew we’d look like idiots zooming through the air on cleaning apparatuses, but I figured it would alarm the dumbass we were going to visit. We didn’t need wands or any of the other witchy crap from fairy tales. The Goddess blessed us with our magic and it came from within.

“I’m gonna ride a broom,” I confirmed. “It’s all about the entrance and we’re going to make a memorable one.”

“Where are we going?”

“Holy shit,” she gasped out, trying not to laugh. “For real?”

“Yep, let me just leave Mac a quick note. He took Henry and Audrey to our secret garden. He thinks they might shift soon and doesn’t want them to tear the house up.”

“I thought they didn’t shift till they were older.”

And that was an understatement. The Goddess had gifted my children with powers I couldn’t yet comprehend. I was still working on my mom skills since I’d had the worlds suckiest parental unit. At least I’d found my dad even though I’d accidentally run him over with my car when we first met—hence my stay in the pokey.

Anyhoo, my kids loved me if their wet kisses and constant smiles were anything to go by. And Goddess knew I loved them. I loved them with every fiber of my being.

However, I didn’t love Roger the rabbit at this moment in time. And he was about to catch wind of that little fact.