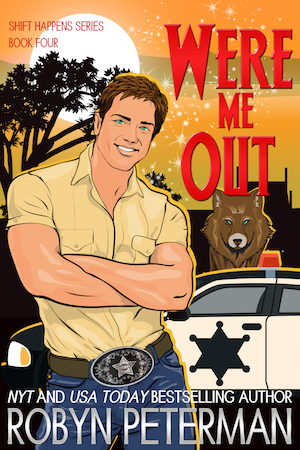 Why do I have to have my tail in a knot for the one hot, sexy Werewolf who can’t seem to keep his Johnson in his pants?

I’m a nice girl—really I am. I’m just a typical computer-hacking, knife-throwing, Star Trek-obsessed, overeducated Werewolf nerd who can’t seem to get her love life to compute

However, it’s time to grow up and face the music or more accurately the man I’m in love with… Junior aka Jacob Wilson—the Alpha of the Georgia Pack. First I’ll have to stand up to some nasty gals who’s pants are so tight I can see their religion. Then I’ll claim my man.

What should be an easy feat, gets sucktastic when you throw in a three hundred year old fabulous gay Vampyre, an antiquated motherboard from the 90’s and a challenge from the vicious, deadly Alabama Pack. Not to mention a libido that is out of control. Mine.

So I’m just gonna dive in—head first and eyes closed. Love conquers all. Right? As long as reality doesn’t wear me out, I plan to win.

“That was a nard hole move,” Junior shouted at his deputies as I winced and tried to slip from the room unnoticed.

As the computer-hacker-guru-extraordinaire slash the gal who made sure the office didn’t go to hell in a hand basket, I was usually exempt from Junior’s displeasure. But that didn’t mean I wanted to witness it.

Junior was generally a laid back good ‘ole boy, but when pissed people tended to duck and cover. Not many wanted to induce the wrath of the stupidly handsome, six foot four brainiac. As Alpha Werewolf of the Georgia pack and Sheriff of Hung, he had a lot on his plate.

Bubba and Duke, the town’s deputies, hung their heads in shame and a healthy dose of fear. The asshats in trouble were Lion Shifters with an unhealthy penchant for attention—naked attention. Hence their latest stunt.

“Sorry,” Bubba mumbled as he sucker punched Duke in the head. “I told you we shouldn’t have done it.”

“No, you didn’t,” Duke countered, titty-twisting his partner in crime. “It was your dang idea—well kinda.”

“I do not get paid enough for this shit,” Junior groused, running his hands through his hair and holding his temper in check.

Simply another abnormally normal day in the Hung Police Department.

My biggest problem at the moment? I wanted to jump the Sheriff’s bones—very bad idea. He was hotter that hell when he was mad. Wait… he was hotter than hell all the time.

Quit. I needed to quit. This was a disaster waiting to happen. I’d have no one to thank but myself if I didn’t march my sorry ass out of the Junior’s office and get a new job—and a life.

Going unnoticed by Junior was almost next to impossible. He had it in his thick, and unfortunately very good-looking head, that we were meant to be.

I wasn’t meant to be mated with a man-whore who couldn’t keep his pecker in his pants no matter how good looking or smart… or hot. Nope, I was sensible. I was a good girl for the most part who would mate with a Werewolf who was a gentleman. Of course using the term gentleman and Werewolf in the same sentence was an oxymoron, but whatever.

I would have two children and I would bake cookies and go to PTA meetings. My mate would have a job that didn’t require guns or wrangling naked deputies. He’d come home at five and ask me about my day. I was going to have a normal, horribly predictable, boring practical life.

Shit—the thought of that future sucked.

I was in big trouble.

“Sandy, where in tarnation do you think you’re going?” Junior asked as he pulled on his hair and gave Bubba and Duke the stink eye.

“I… um… have to run to the Piggly Wiggly and get coffee filters,” I lied with what I hoped looked like a somewhat detached yet business-like smile.

“I’ll come with you,” he replied with a lopsided grin that made me melt—damn him. “Just got to lock up Dumb and Dumber and I’ll be ready.”

“You can’t lock us up,” Bubba whined. “Who’s gonna keep the peace around here?”

“You call strippin’ in the town square keepin’ the peace?” Junior growled. “You two jack holes nearly started a damn riot. This job requires people that can keep their pants on.”

“The money’s gonna go to charity,” Duke chimed in unhelpfully.

I just shook my head and sighed. Bubba’s “um” was an accurate point.

“Don’t you say nothin’,” Junior warned and then glanced over at me to make sure I hadn’t sprinted out of the room. “My pants have been glued on for nine months straight. My days of boffing random gals are long over. Done. Kaput. Finished. Concluded. Dead gone. My balls are so dang blue I’m pretty sure they’ve retreated back up into my kidneys.”

“I think you might be protesting a little too much,” I said, biting down on my bottom lip so I didn’t grin. He was every kind of ridiculous and I wanted to kick my own ass for being charmed by him.

“That didn’t sway you?” Junior asked in all seriousness.

“Well shee-ot, my poor nuts are gonna shrivel up and fall off.”

“Is that possible?” Duke asked, horrified as he paled considerably.

“Damn straight it’s possible,” Junior went on, checking in to see if I felt sorry for him yet.

“Pretty sure my man meat is next,” he added, to a chorus of terrified gasps from his halfwit deputies.

“You did not just say man meat,” I choked out, trying not to laugh.

“Crap,” Junior shouted, completely flustered and knocking the stacks of paper work from his desk to the floor. “I meant rod, not meat. Better?”

His hopeful smile was adorable, but this was a losing game and I needed to opt out soon. I wanted him so badly I couldn’t see straight—horrifying language and all.

“No, absolutely not,” I replied with an enormous eye roll as I began to tidy up the mess he’d just made—again.

“Love muscle?” Duke put forth, not wanting to be left out.

“Enough,” Junior snapped and helped me repair the chaos he’d created. “You two strippin’ turd knockers are not allowed to talk to my girl like that. I’m the only one that can say those words around her. Clear?”

“Good. Get in the cell and do some deep thinking about showing your privates to the town during lunchtime. Mrs. McDonald damn near had a heart attack and that’s virtually impossible for an Octopus Shifter. She’s got three dang hearts.”

“We’re sorry,” Bubba muttered as he dragged his feet over to the cell and made himself comfortable on the cot. “You gonna lock it?”

Junior considered for a brief second and then shook his head. “Nah, but you two are in time out until I get back. You hear?”

“Yessir,” Duke grumbled, shoving Bubba over and slumping down next to him. “We did raise three hundred and six dollars for the new swing set at the park.”

Junior’s head dropped to his chest and he blew out a long slow breath. “Fine. Get out of the cell. You boys done good, but you did it in a dumbass way. You follow?”

Duke raised his hand politely and waited his turn.

“Is this gonna make any sense?” Junior asked.

“I think you’re sayin’ that it would be better to remove our clothes in public after lunch instead of during lunch. Meal times and peckers are not a good match.”

I slapped my hand over my mouth, but a small giggle escaped. Working around men all the time had screwed with my lady-like sensibilities. Of course having six brothers didn’t help either.

“No. That is not what I’m sayin’” Junior snapped and stared hard at the ceiling for inspiration or words simple enough that the boys would understand. “Your Johnson does not leave your pants in crowds. Ever. If it does, it will be removed.”

“You ever heard of a bathroom?” Junior asked, grabbing his wallet, phone and gun as he gently pushed me out the door.

Thankfully we escaped before we could get into a debate about the usefulness of urinals versus trees and fire hydrants.

“We really going to the Piggly Wiggly?” Junior asked with a grin.

“Yes, we are,” I answered, trying to sound prim, uninterested and bored.

Not possible. His scent alone made my head whirl. There was nothing even remotely boring about Junior, aka Jacob only to his mother, Wilson.

I paused for a moment and weighed all the options. He was going to keep asking for things until I agreed to something. I worked hard on my ass. If he wanted to appreciate it, so be it.

Expelling a sigh that sounded like an angry snake hiss, I turned on the big sexy lug. Junior jumped back and did his best to swallow his delighted grin. He failed.

“No, you cannot touch it,” I snapped, lying through my teeth as I marched into the Piggly Wiggly with my head held high. I wanted him to throw me over his broad shoulders, carry me away to a cave, and do me until I was cross eyed. However, that would be a monumental mistake. “Right now my ass is private property. You touch it, you lose your hand.”

“Damn that’s hot,” he said loud enough for the entire grocery to overhear. “You gonna remove my lips if I kiss it?”

I felt the heat crawl up my neck as well meaning neighbors and friends attempted to unsuccessfully hide their smiles. Deciding the best way to deal with Junior was to ignore him, I did just that.

However, Junior was a difficult person to ignore. 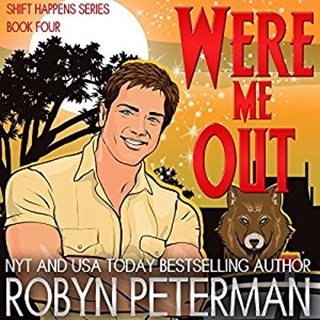 Now Were To Run